FORTUNEVILLE is a dynamic and humorous story of a family of 8 living a life of pure happiness and prosperity. By following the set rules, they are ensured this great fortune in life. Would you follow any given rule if it would ensure your happiness? Especially if one of these rules is to never ever leave your house.

FORTUNEVILLE is created and choreographed by Anton Lachky in collaboration with IDC dancers.

This is the second time Anton Lachky creates a piece for Iceland Dance Company but his piece A Perfect Day to Dream (2011) was a huge success and earned him the award Choreographer of the Year at the Icelandic Performing Arts Awards (Gríman).

Born in 1982, Anton started to dance at the age of 5, in the folk dance company Maly Vtácnik. He continued his dance education at the J.L.Bellu Conservatory in Banská Bystrica, where he collaborated with friends (Les SlovaKs) and also participated in M.A.P.A. (Moving Academy for Performing Arts).From there he went on to train at the University of Bratislava in 2001, followed by further training at P.A.R.T.S., headed by A.Teresa de Keersmeaker (Belgium).

Anton became a member of Akram Khan Company in March 2004 and followed long international tour of “MA” (48 countries all over the world) for two years. As a choreographer, Anton Lachky created different pieces. The most noteworthy are “Twice Read”, “Softandhard” – Helsinki City Theater, “Heaven is the place” – Prague, “Perfect Day To Dream” – Iceland Dnce Company, “Kids in a play” – Zagreb, “Mind a Gap” – Anton Lachky Company.

Anton Lachky is co-founder of Les SlovaKs Dance Collective. They created “Opening Night” in October 2007, “Journey Home” in November 2009, in 2010 “Les SlovaKs – The Concert” and in 2012 “Fragments”. From 2007 Les SlovaKs performed and toured in Europe, Africa, Middle and North America.

In november 2012 he started his company Anton Lachky company based in Brussels with his first production “Mind a Gap”. 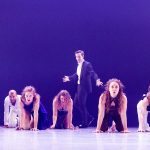