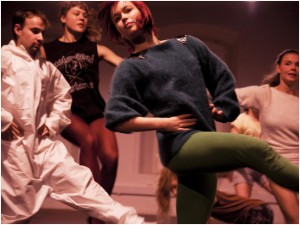 Giselle goes out to all of you that enjoy; Ballet, Cyberpunk, Celine Dion, J.S Bach, Rihanna and Contemporary dance.

Giselle is hemmed by darkness and an almost apocalyptic wildness. As we witness the unravelling and morphing of various characters from the world of ballet, we are confronted with the hierarchies within the language of ballet: it’s technique and pantomime, the distortion of the narrative through score making, the blurring of the roles between male and female, prima ballerinas and corps de ballet. Where princes turn into trees that turn into eagles that turn into farmers that turn into Wilis that turn you inside out.

Halla Ólafsdóttir and John Moström are artists working with dance and choreography, based in Stockholm.They both work in many constellations and their work takes on various forms and expressions, John spends a lot of his time working as an architect and Halla has amongst other things been performing in the band The Knife for the past two years. The initial idea for their collaboration with Giselle springs out of a love/hate relationship to classical ballet and a desire to explore new ways to practice it that can generate joy and a sense of togetherness. They have held workshops and performed Giselle with over a 100 artists for the past three years at MDT Stockholm, Workspace Brussels, Uferstudios Berlin and Kampnagel Hamburg.

Giselle is a collaboration between Iceland Dance Company, Lókal and Reykjavik Dance Festival.

Giselle will be performed at Reykjavik City Theatre – one time only.