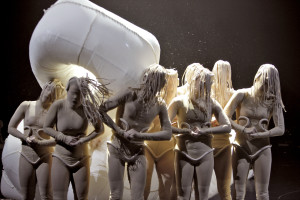 In the 2009 performance Transaquania – Out of The Blue, the audience was immersed in an out-of-this-world experiment.   Using the silky, warm water of the blue lagoon as a stage and theatre, the lava field and geothermal factory as a backdrop set, the performance freely revised theories of evolution and tribal rituals to create a physical mythology of this very unique manmade lake.   The blue water became the cradle of a new life, evolving rapidly towards a rising civilization before disappearing back into the water from whence it was born.

On dry land, we created movement material in a studio that once confronted in the water, forced us to take into consideration two of its inherent primordial elements: the lack of gravity and the absence of oxygen.  Dancers were literally gasping for air, while their body was suddenly much lighter and half floating.  Coming back to the studio and imagining what could be a sequel of the blue lagoon experience where water was the pivotal element:  we were sure of one thing, gravity and oxygen would be central to this piece Transaquania- Into Thin Air.

Sources of inspiration went from pictures of the population of the island of Miyakejima, in the Izu Archipel in Japan (its occupants have to permanently wear gas-masks because of high levels of Sulpher in the air from a dormant volcano), to the recent discovery of an animal called Loriciferans which requires no oxygen to live, as well as footage of cosmonauts evolving in zero gravity environments.

Working in a team comprised of two choreographers and one visual artist, somehow we find ourselves less concerned with choreography and more involved in creating living sculptures. The costumes and set elements become departure points for exploring new ways of moving and new physical possibilities; for re-defining our human body.

This is what the moves and mutations of this piece are trying to portray: a poetic story of evolution in an environment constantly in movement. This piece is maybe our most intuitive ode to the incredible powerful instinct of life, and the way it transforms us in our insatiable quest of survival and growth. 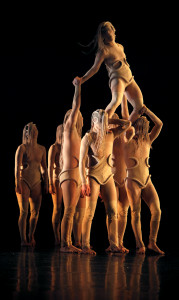 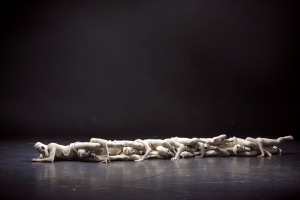 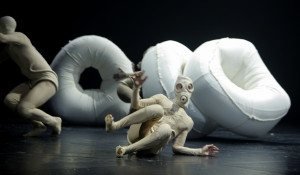 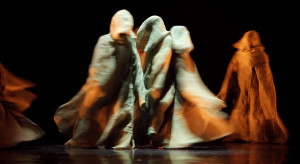 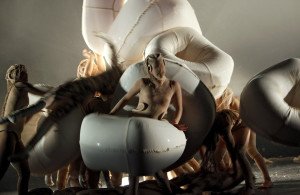 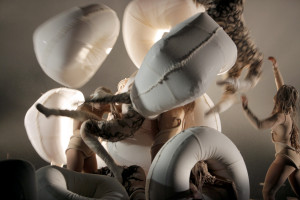 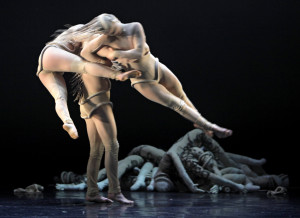 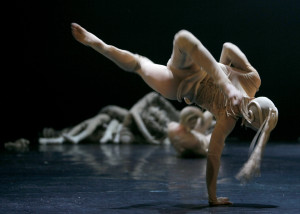 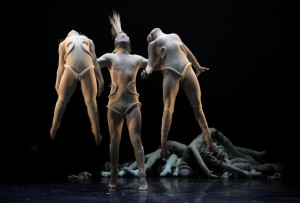 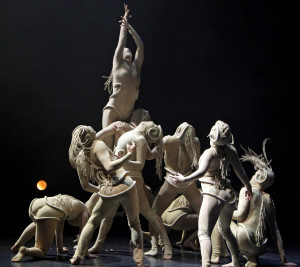 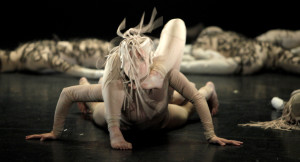 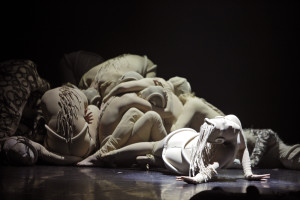 ★★★★
“The musical and visual frame is to be proud of. The interplay between all the elements that make up the bigger picture is carefully thought of… it is a joy to see how the creative team succeeds in integrating the art forms.”
“The combination of the music, the movement and the heavy breathing was so mesmerizing that the audience forgot to breathe themselves”
“The bodies of the dancers create living sculptures and with the aid of the visual frame all preset ideas idea of physical limitations are removed”
“The piece is very accessible and despite a serious undertone it is actually quite humorous”
“Transaquania – Into Thin Air is at the same time beautiful, scary, funny and serious. A performance not to be missed.”
Morgunblaðið, October 2010 by Margrét Áskelsdóttir

“The dancers performed well and worked as one body, one organic unison”
“To watch Transaquania was like experiencing the creation and destruction of the universe”
“Transaquania is a holistic piece in terms of both the integration of the art forms as well as the structure. It captures the attention of the audience from the beginning until the end.”
„To summarise: A holistic piece where the audience is taken to a magical and mythological world”
Fréttablaðið, October 2010 by Sesselja G. Magnúsdóttir

“This was a beautiful experience which I´m very glad I didn´t miss. The artists behind it are brilliant. Ómarsdóttir is extremely original, she´s one of a kind. She plays with the human body like an instrument and together with Jalet and Friðriksdóttir they have created unforgettable pictures, paintings and sculptures that move continuously, collapse, dissolve and formulate again like clouds in the wind”
“The dancers demonstrated incredible skills. It is a pleasure to see the group so synchronized and so powerful”
Pressan, October 2010 by Bryndís Schram

„Early, gripping success in ‘Transaquania: Into Thin Air’ was evident as the dragged (drugged?) somethings reached their trembling forms toward heaven, and then collapse to the ground to lay still and then swarm in their skins and wombs….. Out of this opening sequence follows a series of stunning acts. All nine somethings proceed through multiple metamorphoses to reveal their alien selves, barely alive and barren. The consistently skin-tight flesh-toned costumes cause a dizzying, perfect incongruence with the asensual choreography — expert execution of the artistic team’s collective vision to explore human reality in a post-water existence. “
„Into Thin Air“ is a work crafted of rare and challenging vision to raise questions and concerns about awareness, to propose dialogue and inner monologue around how now is and how else it may be.“
Grapewine, October 2010 by A. Rawling

“Transaquania is a very strong and emotional experience. It´s a journey to the genesis of the cells of oneself. The contributors of this researched and visually sophisticated choreography besides Iceland Dance Company, are three world known artist, Erna ómarsdóttir, Damien Jalet and Gabriela Friðriksdóttir. Together they have created a unique atmosphere in the auditorium.”
http://teatridicartapesta.blogspot.com – Italy

“Transaquania – Into Thin Air” with Iceland Dance Company is an advanced contemporary dance performance. The movements in the piece are slow and refined as well as enormous and divine and complemented with emotional commitment from the dancers”
“The dancers were ridiculously good, sometimes exasperating and repeating laborious, fully embodied movements which were not only deriving from their muscular strength but from an inner energy, which was essential for the interpretation of the choreography.”
http://www.livecity.it – Italy